Creative Metalworks’ founder, Merrill Denney, was the first to bring a creative spin to otherwise ordinary bike racks. He has been creating metal and mixed-medium sculpture primarily used for bicycle parking since 1992. Holding a number of design patents, Creative Metalworks designs and builds mixed-medium interior furnishings and landscape art in addition to our work on bike racks.

A cyclist himself, Merrill’s interest in bike racks was borne from his personal experience and disappointment in commercially available racks.

This is his story: “In 1968 one of my favorite places to hang out in Salt Lake City, Utah, was the toy store about 2 miles from our home. They had all the usual things of the time, but the best part of the store by far was taking the trip down the wide staircase to the basement. There, among other things, were all of the beautiful new bikes for sale. I remember the smell of new tire rubber that had not touched pavement, and shiny chrome that had yet to see the light of day.

One bike in particular caught my eye. It was a metallic purple Stingray, with a 3-speed shifter, chrome fenders, and white wall tires. It was amazing. After repeated visits to the store to worship the bike, and an eventual confession to the owner that it was never to be afforded by my family, I was made an incredible offer. I was given the opportunity to work the bike off.

As an 11-year-old, this was a dream come true. I made $1 an hour, and worked that summer to buy that wonderful machine. The blurry photograph is my only record of the day I went to claim my prize. There wasn’t a happier kid in the valley. I was proud of what I had accomplished, and that bike was an instrument of freedom for me. Unfortunately, that joy was short-lived. A few months later, the bike was stolen outside of a store that had no bike racks, and that I had visited only for a few brief minutes. I was devastated. Perhaps that planted (even on a sub-conscious level) the intent to someday thwart the attempts of future bike thieves.

Fast forward some 25 years later. I was living in a rural area just outside of Portland, Oregon. For years I had worked in the metals trades. My interest in metalworking had begun with an industrial arts class in high school. My teacher, Mr. Fred Hartley, had recognized my interest in metalworking, and did a fine job of nurturing it. I had just finished a popular bike ride in this rural area where I lived, and stopped at a small country store on the route. Many cyclists visited this store, and on the day I stopped there were 3 or 4 other bikes laying out front with mine.

As I had gotten to know the store’s owner, I took it upon myself to give him a hard time for not having a bike rack. I remember the conversation that day. “Tom, you’ve always got bikes laying around the front of your store, when are you going to get a bike rack?” He replied, “Well Merrill, you work with metal, why don’t you design me one?” My reply was “Well, maybe I will!”

I left the store and, with a few miles still to go before reaching home, I began to think how I would address Tom’s challenge. At the time (early 90’s), ‘wave’ racks were becoming “the” bike racks. Besides not being a huge fan of them, I didn’t feel that a contemporary design would be appropriate for Tom’s wooden floor country store. The design I came up with eventually became the “Cruiser Meltdown.” Tom’s store was my first sale.

Since then, I have had the pleasure of doing what I love most. That includes creating designs that make storefronts and city streets look better. The best thing may be providing bike parking that discourages the kind of people that attempt to snatch away the machines that provide freedom to kids of all ages. 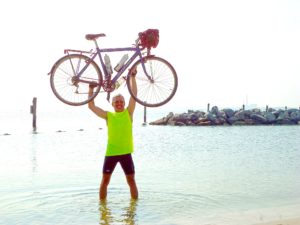